Our Memorial closing bonspiel has come to an end. A FUN weekend of curling was had by all. It started on Wednesday night when the skips got together to draft their respective teams, a new system that we are trying this year. We did it also for the Skins cash spiel. Games started on Friday night with all teams playing an 8 end game. Neil DeCoff and Danny Rogers supplied us with some great music. On Saturday the games were all 6 end games. In the end all teams ended up winning at least one game and one team went undefeated. Team Brymer ended up on top with 112pts. Team Brymer with Shauna Brymer, Iris Stanley, Teagan Lombardo, and Charla Cosgrove took home the trophy. Congrats to their team. In second place with 94pts was Team DeCoff with Neil DeCoff, Phil O’Regan, Mary K. Connolly, and Sharmaine Shea. And finally in third place with 79pts was Team Armstrong with Don Armstrong, Ray Bates, Heather Manual, and Jim Muise. Lots of thanks go out to all who helped out to make this a fun season ending spiel. Our turkey for our turkey dinner was donated to us by fellow member Wilfred Myette, our kitchen help headed by Kay Chisholm with help from Nancy O’Regan, Sharmaine Shea, and Marg Halloran, bar staff headed by Holly Nahrebecky with help from Brian Farrell, ice maintenance headed by George Luddington with help from Phil O’Regan, Don Armstrong, Neil DeCoff, Brian MacDonald, Jim Muise, Kenny O’Leary, and Wilfred Myette. Thank you’s also to all who donated food, Ray Bates for his help in getting all the prizes from many including Martin Marietta, Central Supplies, Wal-Mart, Avery’s Independent, and Labatt’s. And thank you Ray for your season long drive to get us that extra money from the 50/50 draws and of course thanks to all who bought the 50/50 draw tickets. Finally to Phil for getting this spiel together with help from Shauna Brymer. Here are some pics from the spiel: 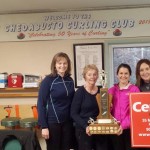 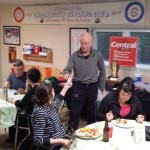 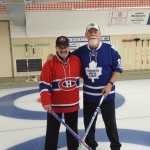 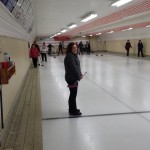 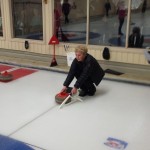 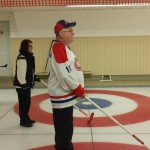 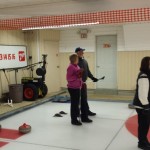 Brian and Lois discussing their next shot… 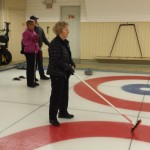 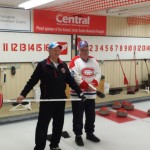 Our line of skips calling shots from behind the glass….lol

Evelyne about to deliver her rock.. 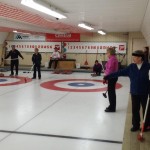 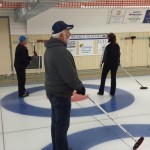 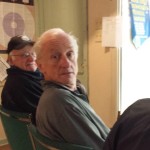 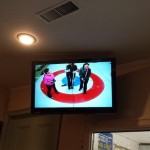 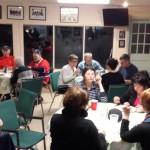 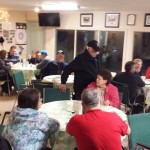